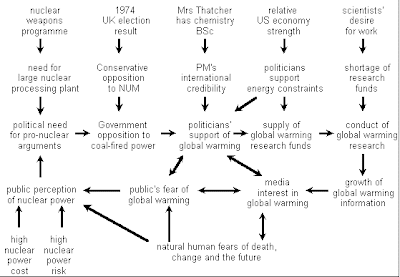 Recently three changes in atmospheric chemistry have become familiar subjects of concern. The first is the increase in the greenhouse gases?carbon dioxide, methane, and chlorofluorocarbons?which has led some[fo 4] to fear that we are creating a global heat trap which could lead to climatic instability. We are told that a warming effect of 1°C per decade would greatly exceed the capacity of our natural habitat to cope. Such warming could cause accelerated melting of glacial ice and a consequent increase in the sea level of several feet over the next century. This was brought home to me at the Commonwealth Conference in Vancouver last year when the President of the Maldive Islands reminded us that the highest part of the Maldives is only six feet above sea level. The population is 177,000. It is noteworthy that the five warmest years in a century of records have all been in the 1980s?though we may not have seen much evidence in Britain!