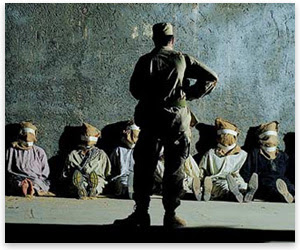 Guantanamo: A Long Train of Congressional, Executive, and Now, Judicial Abuses, por P. Gardner Goldsmith, no Mises Institute.
«To many Americans this might not sound like such a big deal. After all, the "detainees" or "enemy combatants," as they are called, are all foreigners suspected of terrorist activities against American citizens. But what needs to be remembered is that we have a system under which this country is supposed to operate, and that system is set down in the US Constitution. Avoiding it without trying to amend it is an injustice to the Founding Fathers who wrote the rule book for the operation of the United States, and to those of us who were under the mistaken impression that we operated under the rule of law. (...)
###

As a result, US citizens can now be designated "detainees" and held indefinitely without trial, or habeas corpus hearing, and if they are brought to trial, they can be put on the stand in quasi-federal courts created by the executive branch, not the legislative branch. (...)

As it stands under the law, and the recent court rulings, American citizens can now be arrested by the federal government, held indefinitely without trial, questioned under standards we would not allow for our own soldiers if captured by other nations or subordinates of those nations, and never have a hearing to find out the evidence being presented against them. This is shameful and stunning, and is all derived from a legislative branch that is unwilling to do what the Constitution allows it to do: declare war.

When Thomas Jefferson wrote the Declaration of Independence, the "train of abuses" by the Crown that he cited filled half a page. Today, Jefferson's quill could fill volumes, and every abuse is being perpetrated by the very politicians and bureaucrats who swore an oath to uphold the government he helped establish. It is a sad commentary on the likelihood that any constitutional republic can long endure without growing to infringe on individual rights, and makes one wonder why anyone ought to put his trust in even the most limited of governments in the first place.»